Cycling Artist Michael Valenti has been to the Tour de France three times now. Twice chasing the stages each day in a motor home – the MOHO. On his third trip he spent nine days in Belgium and France driving alone from town to town staying in local hotels. A change of pace for sure, cleaner, better sleep but not as much fun. And chasing the Tour is all about the fun. See for yourself.

This was my first Tour de France chasing the peloton for twenty of twenty-one stages in a motorhome with Keith the “Birdman” driving and Harm Job, the Dutchie feeding me beers and one liners about the Dutch all day.

I did my second Tour de France chasing the peloton for seventeen of twenty-one stages in a motorhome with Gary Bender, aka “Bender”. He did all the driving, I did all the cooking. We both did all the drinking. We did less Tour stages because we did more bike riding including Alpe d’Huez and Le Tourmalet. Vive le Tour!

Michael’s third trip to the Tour de France was alone. He started in Paris, drove to Belgium where he visited the famed chapel on the Muur van Geraardsbergen. Watched the Grande Depart from Brussels and saw Eddy Merckx! Then returned to Paris after just four stages – a short but exciting trip. 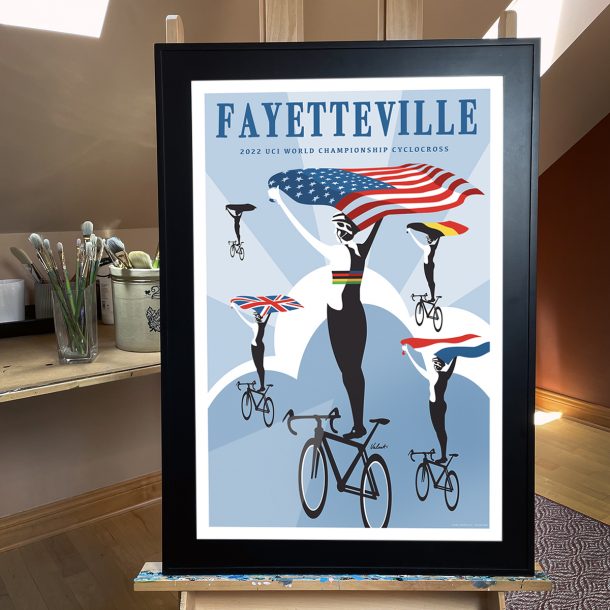 Follow Michael Valenti at Veloist and receive a Discount Code to Save 20% on your order!

Just grab the code that pops up and use it to save on Open Edition Cycling Art Prints. And don't forget, shipping in the US is Free!

Use this Discount Code on your order - VELO22 - and Save 20% on Open Edition Prints. Thanks for Following!