A trip of a lifetime

As I sit here looking at hundreds of photographs I took in Italy it’s hard to find a place to start. The new friends, the stunning locations, the food and the Italian hospitality were all so positively wonderful, I know I don’t have the words to do them all justice, but I’ll do my best.

Landing in Italy was a big deal for me, my first time so I was excited about the trip to say the least. Having the great relationship I have with Ride International Tours was a bonus because it meant not only would I get to see and draw stages of the 2019 Giro d’Italia, I was going to ride on some of the very same roads. Under their watchful eye and much slower of course, you’ve seen my Strava Page right.

As would be expected the first thing I ate was spaghetti along with a Birra Moretti la Rossa. One of many to come. Off to a good start. As it was explained to me I was always eating for tomorrows ride and I’d need the energy.

In no particular order I’ll hit some of the highlights of the trip knowing I’m leaving so much out, not on purpose but because there’s just too many great things to talk about. I’ll be boring my Veloist CC mates for many, many rides.

I live just north of Chicago in a place where cold weather is common for six months of the year. You might say I’m okay with the cold, you have to be if you ever want to ride your bike here. So as directed I brought all my winter gear with me to Italy. But nothing, I mean nothing will keep you warm descending from the Passo del Mortirolo after climbing up that wall.

I rode this famous route the day before the Giro came through and it was already in full party mode at the summit. These Italians love their mountain top stages. With grades near 20% in some places on my Wahoo I saw a lot of 8% – 13% so this was a tough climb for me. I loved every minute as I unzipped my jersey and worked my way up the mountain. As you might expect I was quite warm by the time I arrived just in time to turn around and go back down.

Now this is where the cold happened. A type of bone chilling, teeth clenching and chattering, squeeze every muscle in your body to fight off the wind chill type of wet body, freezing cold I have never experienced. My clawed hands were frozen to my brake levers as we snaked our way down the road. All the time our guides were saying “Relax in the corners”. I don’t think I will ever be that cold again.

I smiled all the way down.

The top of the world on Stelvio

If you could imagine what a bike ride up a mountain pass would look like, I think it would be the Stelvio. As the famous switchbacks wind their way up the side of the mountain it offers such wide vistas no photographs could ever give you that same feeling you get riding it.

It was quiet, it was relentless, it was vast, raw and powerful. Much of it was covered in snow as we got closer to the top and the Gavia pass was closed, to us and the Giro. I spent much of my day alone with my thoughts and the sheer scale of the landscape made me realize just how small we are in this world. When I would look forward or back to locate another rider they were nothing but a speck. A dot of pink, on a black ribbon winding through the white landscape. For me it felt like the top of the world.

The Dolomites riding the rollercoaster

If there is a playground for adults on wheels in the Alps, it’s on the Sella Ronda Loop in the Dolomites. This ride was a play date for any cyclist that dares the ups and downs, the twisty turns, the motorcycle traffic, the exotic car traffic and the relentless stunning beauty of the surrounding peaks. A 360 degree, never ending, rollercoaster ride of epic proportion. Can you tell I enjoyed this day.

Having climbed the Stelvio and the Mortirolo, the four climbs we did along the Sella Ronda Loop were but a bump in the road to breathtaking sights and long winding descents. What a spectacular day it was. Picture perfect weather was the icing on the cake.

Did someone say cake? At least four kinds of cake were always present at every breakfast I had in Italy. Little speck sandwiches too. Plus breads, rolls, muffins, eggs, bacon, cheeses, yogurt, fruits and vast quantities of espresso. In my case at least four every morning with a little water “Americano”. I’ll miss breakfast.

Not far from Como on the other side of a hill is the famed Chapel Madonna del Ghisallo. A shrine to cycling’s heroes. For me this was a major highlight of the trip, a holy place, a quest.

On the morning the Giro was passing through here I left my hotel alone, I didn’t go with the group because I had some work to finish and planned the day to be alone somewhere on the route. Never intending it to be at the chapel because we had gone there the day before.

I rode along Lake Como north from our hotel in Lecco and arrived in Bellagio sooner than expected. I saw the pink arrows marking the route so I decided to follow them up the hill. It led to the Chapel Madonna del Ghisallo, I was thrilled, this was not the plan. This was divine intervention if you can believe in that sort of thing. The crowds cheered me up the last one kilometer climb and I arrived as the Giro riders would in short time.

What happened next will stay with me forever. I’ve been blessed with a vision, a feeling, and a sound I will never forget.

As the Giro d’Italia riders approached I could see the TV helicopter rise up from the valley below, the crowd came alive and the the chapel bells rang out the arrival of the cyclists. I had no idea this would happen. My jaw dropped, my eyes teared up. They rang loud and steady, each chime echoed in the surrounding mountains and through the hearts of everyone there.

With my tear filled eyes I looked at the older Italian woman standing on the bench next to me, I smiled, she smiled and said “I know” as she tapped her heart with her hand. Blessed.

This trip would not have been as special without the people I shared it with. Starting with a longtime friend John Valley. We’ve been riding together for at least ten years and I was so happy when he said he was coming along. He’s trusted, funny and turns out a very neat roommate, tends to be gassy, but I’m glad we shared this adventure.

As for the others in the tour group, well there was Ren and Stimpy, (Stephen and Luke), Pistol Pete, Clint, Darryl, all Aussies. From them I learned many new and weird words and sayings such as Rippa! And something about being toey like a Roman sandal. Still not sure about that one. There was also our two set of couples, Steve and Sue from, can you believe this, Sharon Massachusetts next to my home town of Stoughton — that’s a small world thing. And Dawn and Peter the “Dynamic Duo” on a four month holiday cycling Europe!

A special thanks goes to our guides from Ride International Tours. Pat the mastermind, Pikey in Pink, Alberto the champion and Umberto the smiling guide from Como — all special people with the talent to make you feel safe, at ease and welcome. A big special thanks to Grace behind the scenes making all of this possible without a bump. 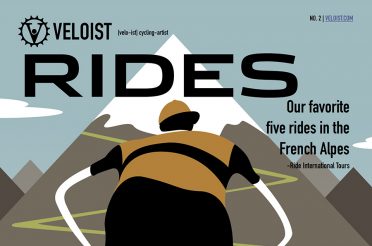 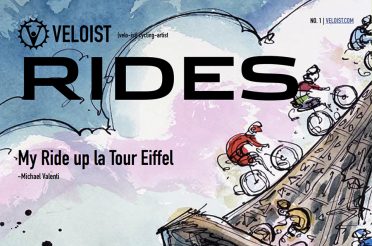 Buy One Print - Get One Print Free when you follow Veloist. 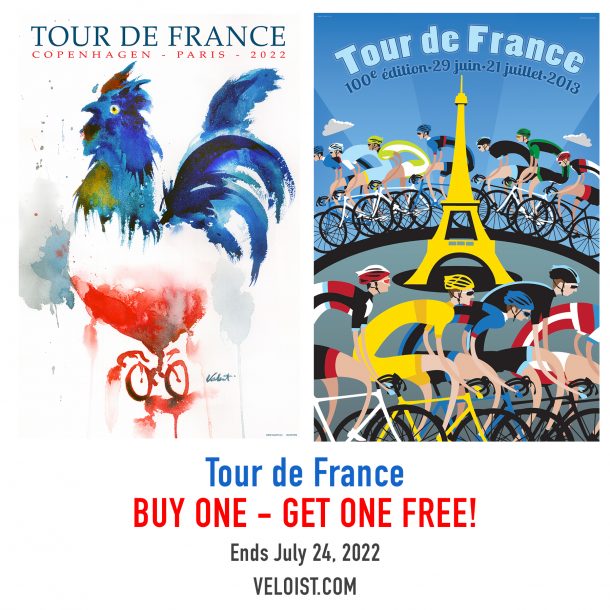 No other Coupon Codes will apply during this promotion. This promotion will end on July 24, 2022

Thank you for following! Enjoy your Buy One Get One Free Print. Check your email for more inside deals and information. Enjoy the Ride!

Thank you for Following Veloist. Enjoy your Buy One, Get One Free Print!